Our fruited gose game just took a step up to the next level. A branch of the brewery that’s been quietly ticking along, improving with each batch, we feel we’re at a point now with our fruited sours that we can let ourselves completely loose in the same way we do with our huge pale and hoppy beers. Taking inspiration from the Kriek beers we used to knock back during our formative drinking years in our hometown, Red Odyssey features a staggering 75kg of sour cherries, with a further 50kg of sweet cherries, as well as 2kg of Halen Mon Sea Salt, sourced a stone’s throw away from the brewery, to create a triple cherry gose positively bursting at the seams with flavour. The biggest experiment with our sour beers we’ve ever done, and a statement of intent where we’re going in the future. 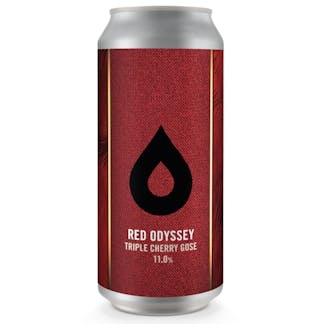